Discussion of music production, audio, equipment and any related topics, either with or without Ableton Live
Post Reply
28 posts

just discovered this genius
any other fans??

what some good stuff to check out??

Yeah he's done some great stuff.
Man is seriously prolific though !
Here's a few of his tunes I rate.. but there are a massive amount to go through ! I've been buying his albums for about 10nyears and I still find the odd gem.

and of course
Take a Chance, which was very successfully covered by Mr Flagio
http://overfitted.ddcr.biz/?p=1315
Top

Word. I've been doing loads of Laswell since the late 80s. Prolific is right... gonna take some time to get through that catalogue.

Praxis!
Massacre (Fred Frith, YAY)!
jazz is a woman's tongue in your mouth
cool, licking you slowly, revolving around
inside your cheeks.
letting you know who's come to visit.
Top

new to me this is mental. sounds like bootsy too
Top

Yeah, this is classic! It's the great Buckethead (listen to Giant Robot!), Brain, Bernie Worrel and - of course - Bootsy! Kind of Zappaesque in its humour! Ueber-cool!

http://en.wikipedia.org/wiki/Transmutat ... _Mutandis)
jazz is a woman's tongue in your mouth
cool, licking you slowly, revolving around
inside your cheeks.
letting you know who's come to visit.
Top

one of the greatest producers...
chceckout his Bob Marley and Miles Davis and Santana Remixes....their on their respective catalogs...
also Praxis/Material/death cube k/shine/his electronic solo albums and collabs with Pete Namlook
...and cool stuff from his label 'Axiom'...
great experimental stuff..
praxis 'transmutations' is probably one of my favs of all time... a psychedelic funk supergroup...(Buckethead/Bernie Worrel/Bootsy/Brain)
also the Bob Marley Remix album/dub is like a chill pill to me...I recommend it on a Sunday morning after a hard night out...

I'd recommend you to listen the following albums by this bass-player-producer:

Also if you like that, go check Jah Wobble - he is another full of bass-awesomeness Laswell fellow bassist

Oscillations is a good album... also his collabs with Jah Whobble (Dub transmissions)
Death cube k stuff is pure evil...if you're into some industrial ambient vibes...
material is more 'World music' oriented..
I like that his Aesthetic is usually far from mainstream...
always experimenting...

he's worked on so many projects with so many artist... looking at his discography and credits might make one cringe...

new to me this is mental. sounds like bootsy too

Laswell fan from way back.

Praxis is proof positive that amidst all the horrible fluff there are still folks out there actually making interesting, creative, boundless music.

Anyone interested should really do themselves a favor and also check out a quite bizarre and AMAZING treatment he gave to the music of Miles Davis.

Laswell reconstructs/remixes/rebuilds the music of Miles from the In a Silent Way/Get Up With It era. On paper that sounds like it could be a fucking train wreck and the ultimate blasphemy (Miles needs no messing with), but it's not. Instead, it's one of the most amazing records I've bought in the last 20 years. Laswell was given access to all the original recordings, and sometimes deletes tracks or, in a way cool turn of events, discovered tracks that were recorded but not used and weaves them into the compositions. Sometimes he adds a bit of his own ambient and/or bass noodling. An amazing auditory experience.
I came for the

some nice tips in this thread as well, cheers
http://www.slatepipe.co.uk
Top 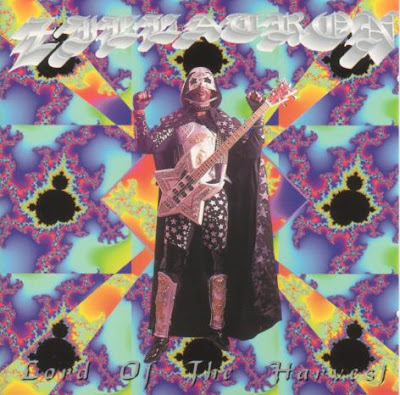