what was your worst hardware purchase of all time?

Discussion of music production, audio, equipment and any related topics, either with or without Ableton Live
Post Reply
223 posts

deva wrote:My worst hardware purchase would be back in the 80's when I bought an Oberheim analog synth then went traveling, put it in storage then sold it a few years later at a huge loss cause Midi had come out... hardly ever used it

I don't think anything by Oberheim can truthfully be said to be the worst purchase. They make MIDI retrofits for the OBX, OB-8 and OBXa line now.
Given the chance would you still sell it?
Top

I know a lot of people hate this interface, but mine has been great.

YES, the drivers were shit. They finally seem to have got that fixed. 4 years after it was released though.

YES it acts odd at times -- but never if you actually shut down your computer, then put the FW410 in, then start up your computer. It does stink that you can't hot plug the thing and have it work reliably, but they certainly never said that you could. It was important enough, or at least a known problem, because mine came with a separate sheet of yellow paper in the box warning me not to hot plug it, ever.

Mine has been a workhorse and never caused me a problem playing live, but I suspect I'm the rare exception here.
Top

The original minimoog. The damn thing only plays one note at a time!
Logic Studio, Live 7, Max 5, Monome 64, and Desktop Evolver
Top

I bought an Aardvark LX6 I/O, It was an amazing unit actually... Unfortunately the company literally abandoned ship w/o finishing their buggy drivers, leaving users fucked.

Alienware MJ12 7000. Fans constantly spinning at the volume of a blender. That thing crapped its pants after like a year and a half of use. What a fool I was.
Livebook Pro - Core2 T7600 2.33GHz - 3G RAM - Win XP Pro, MOTU Ultralite, Akai MPK49, KRK V4s, PODX3, GT55, plug-ins, melodihorns, castanets, bugles, ocarinas, broken violins, voice
Top

JJarvis wrote:The original minimoog. The damn thing only plays one note at a time!

roland xp-80 workstation
not a bad piece of gear in and of itself, i was just young and naive and it wasn't really what i needed. a good VA or something at the time would have been great, but this thing had too many 'real' sounds in it and not enough knobbage.

emu 1616m soundcard
only recently replaced this, it would be a really nice piece of kit if the build quality was a bit better. headphone jack on the pcmcia card went inside the card within about 2 months of getting it, RJ45 sockets didn't take much punishment before they stopped 'clicking' in properly, all the 1/4" jack outputs sound totally distorted now. saying that it did get worked pretty hard, shoved in rucksacks and stuff a lot, etc. oh well, hopefully my new fireface 800 will do me a bit better!
Top

Yamaha dx11... Sold it quickly, sounded horrible and so thin...
AKG C2000B for vocals... what a mistake, good for percs though
Samson Resolv65a... breaks my ears, so hi sounding
Top

monoschall wrote:oh man I have bought so much 'great' junk in the past (moving to a
Software based studio from Hardware really made a lot of my gear redundant but
make the distinction between that and totally useless

SP-808EX: I bought this for doing live performance - yeah right!!!
It's best feature is that you can set the pad buttons to flash on and off in different patterns!

I can't deny - its definitely one ugly ugly bastard, and pretty useless in the sampling department these days - but,

check the on board effects, really fantastic stuff. I'd say its great value as an multi fx machine for the price they are on ebay now
http://www.babkubwa.com
Top

got it for $75 at guitar center so I figured at that price it's gotta be $75 worth of useful right? HATE the sound of it mostly because I f*ing hate it's filter. I've heard some good tunes out of it though, but I can't help but tweak a filter when I see one and it sounded terrible. so I sold it about a month later for $100. $25 buck profit isn't too shabby

I sorta miss the sequencer though, it would be useful for step sequencing my micro modular for sure, but I think I would pass on buying another one just so I don't have to look at it

It was as if someone shook up a 6 foot can of blood soda and suddenly popped the top.
Top

Roland VS-840EX. I was at the point of 'I want a multitrack recorder' about 10 years ago and had just enough cash to cover one of these. I really wish I'da bought the VS-880 or the Fostex eqiv!

I admit the A-3000 was quite shitty in the sampling department but I used it with great success as an analog synth and a multi-fx. I still cant replicate the warm analog sound I was getting out of this box with any vst synth. Auto-wah+fuzz and you'd get some killer NIN guitar sound.

Worst for me was the Motu 828 interface. It broke after few months and MOTU never replied any of my emails.

I've just bought this baby for 26$ last week... I'll try it today and tell you if mine suck so much! Reviews are quite good for such a cheap object. For 26$, you cant complain much...
Top

Jomox T-Resonator, it was so noisy when idle, using without a gate was unacceptable. And the idea of the crazy effects matrix seemed better & more rad than it actually sounded. I didn't record thing with it and sold it in about 2 months. I knew something wasn't right in the beginning, but I was in denial, should have returned it while I had the chance. I still have a XBase, which has a little line noise but not near the buzzing that did. I actually like and still use the XBase.

After that, I'd have to say the Korg Nanokey would be second worst, what a hunk o' junk. I had my doubts at the time but bought it anyway because I wanted something small & portable. It was like the quality of a prize you'd get from one of those arcade grabbers (if you're lucky). I could barely get any velocity out of it and I actually thought the keys on my laptop played better, but what do you expect.

Third worst Virus TI, it actually sounded good, but the amount of time wasted getting the TI part to work with Live and failing was unbelievable. Lots of decent takes lost due to crackling, popping & freezing of the USB output. I tried to get it to work for a couple years with no success over several firmware updates. I could have used only the analog outputs but I couldn't stand having something that only half worked, so I lost interest & sold it on eBay. 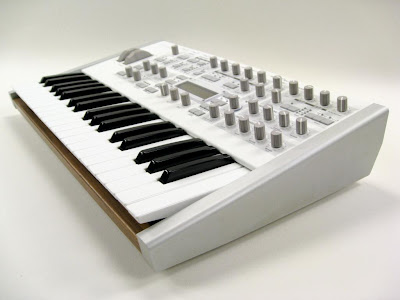