who creates art in areas other than music?

who creates art in areas other than music?

by slatepipe
making music aside, who here makes art in other areas?

anyone paint? sculpt? make films? anything else?

cheers
by koneko
im a cinematographer. that is a cameraman

www.shailevy.com
by udp
Would never serve an icecream cone that wasn't well balanced and proportioned.
by kennerb
I sculpt and make puppets
by D DAS
I draw and paint, with organic mediums and with light (digital)

unfortunatley i use most of my creativity at work doing design, but this year I am devoting more time to my art.

only one page up for now but a lot more coming soon.

d~
by OrsanKart
in the bed

no i do some photography!!
by Poster

by Novel
Is writing art? Because I write a lot of crap down.
by The Phat Conductor
i draw, do graphic deisgn, write, and sing stupid songs around my house

by Thinktanx
Lots o' writing... a bit of graphic stuff (really just for fun). Used to draw and paint, but not for many years. I have actually been thinking I need to pick that back up. I would love to combine the drawing, painting, graphics (right now it is all in the CPU).
by formatk
I'm a designer and animator. I make weird music videos and installations.
by genshi
I'm a designer toy maker with my first toy, the Broken Heart Robot being a fairly good success. 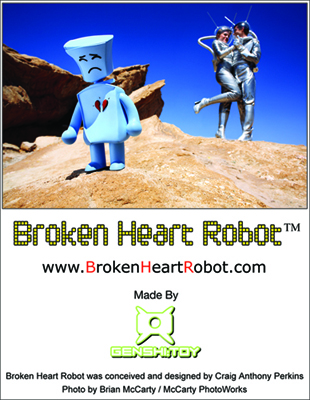 I also recently did the face of my latest CD:

by Haselmeier
i do semiprofessional PhotografX together with a friend, who is professional. I do a lot makro-shots, and, do not laugh aktshoots.
Also it comes each day a little more clear, that i have to do a movie, yes, doesn't matter which quality, maybe i start with my mobile, but i want to put bits and bytes together, making the soundtrack and will watch it until i die.
I know, i am my greatest fan, i am able to listen to music which i have done 20 years ago with MS20/MS50/SQ10/VC-10/KPR-77..., yes i listen sometimes to it and like it everytime a bit more.....
by Machinate
I am moving into the interactive digital art scene now, I hope to have a vj rig ready to roll by mid summer. It will be centered around the OpenGL-Jitter patch I have built for my band.
It will be mostly or totally generative art, created on the spot, and highly responsive, while the operator of the patch simply guides it in the right direction.

I am really excited about this turn of events in my creative carreer!
All times are UTC
Page 1 of 5
Powered by phpBB® Forum Software © phpBB Limited
https://www.phpbb.com/