Discussion of music production, audio, equipment and any related topics, either with or without Ableton Live
Post Reply
125 posts

very strange, the video is down. i want to see it.

It is extremely difficult, if not impossible, to fully absorb the 'facts' and make any decision on the attacks. However, the WTC7 collapse suggests to me that some internal US organisation were complicit. Though this does not necessarily implicate that the Twin Towers were an inside job.
Top

everything else aside, the tower 7 collapse is the smoking gun. that is the one major event that is just not explainable. if that building was truly demolished, then we have to assume the whole day was a conspiracy.
Top

...and here we had a video of newscasters reading a press release about the (historically unprecidented) 'collapse' before it happened.

i need to find that video.

hey phat you didn't by any chance record the audio of it did you?

my dad hosts a talk radio show and would love to have that footage for the next broadcast.

only thing i can find relating to bbc and wtc was this movie, i do not have speakers here at work so i can not hear what it was saying. i did see steven e jones on it though.

i didn't save it. i really should have in retrospect.

i bet the nice folks

over at prisonplanet.com will have it up before long. it's the most incriminating shit i've seen yet.
ill gates aka the phat conductor
producer, performer + ableton/music teacher

this is pretty relevant though... 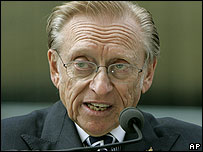 damn! i wish i had hi-speed. is this shit for real?
very strange.
Top

it is for real.

man, i think i just alienated the entire toronto club community messageboard by posting this....

Kodama wrote:Quit hating our freedoms, support the troops, and respect the decider!

wholy shit, that is the smoking gun right there. whoops. busted
Top

I cant watch it right now, and have thought the neo-cons were behind it right from the start, but from what I understand of what you're talking about - how do you know the times? couldnt an audio track just be out of sync?
Ableton certified trainer
Top