Discussion of music production, audio, equipment and any related topics, either with or without Ableton Live
Post Reply
24 posts

One of those bands I kind of missed the bus on. I'd heard them through friends ever since the early 90's, always liked them but for some reason just never got into them myself.

Well recently I bought "the Radio 1 Sessions" compilations on a whim and I'm so glad I did. Really amazing band. I'm completey blown away and finding myself fascinated by them... I want to own all of their releases on vinyl, learn everything about them. make stereolab t-shirts and spray paint the word sterolab on my dogs... I'm smitten.

Seriously though, I'm stoked over this latent discovery of mine. Any other fans? Care to recomend which albums I should buy in which order? I suppose I'll start with the early stuff and go forward.
SoundCloud
Top 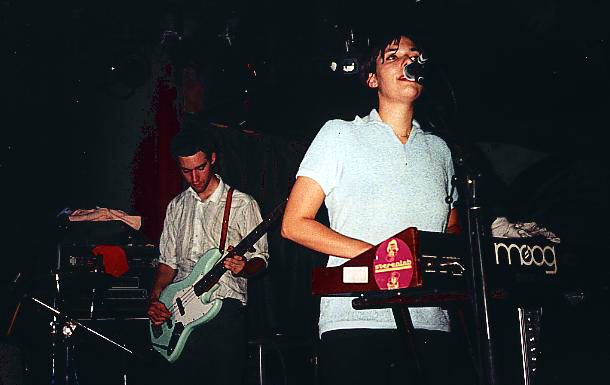 
This track blows me away everytime I listen to it. Super Electric:
http://www.youtube.com/watch?v=GFaCaOqEwaw
SoundCloud
Top

also Emperor Tomato Ketchup and Dots and Loops and favourites of mine.

I produced an album by Th' Faith Healers, their Too Pure label mates, [before they started Duophonic] and then we toured the eastern US together. This was just after they recorded Peng! - which is my favourite album of theirs.

"Avant Garde M.O.R." from the album "The Groop Played Space Age Bachelor Pad Music" is a wonderful song too.

they´re nice, but also boring after a short while. they did best in their very early, "peng!" is my fave too. the others do lack in the one or other way, there was no complete album doing it since again. but a good load of songs.
-


"after all it wouldn´t have been possible without the impossible."
Top

Dots and Loops is on the list next time I go to Amoeba!

I love stereolab.
I remember seeing them at the lowlands festival (97?) in one of the bigger tents that could fit 10.000. I think there were only fifty people

I loved the set but i could feel their dissappointment, or maybe it was projection.

Well, what's with dots and loops? What do people not like about it? None of the songs from it are on my compilation, but I listened to "Miss Modular" on youtube and it sounded pretty cool to me.

I think what got me hooked on this band first was just the straight out sound, just the power of some of the driving repetitive melodies - not sure what it is about the sound that gets me, well I am sure, but I lack the ability to properly articulate it. I'm definitely a sucker for female vocalists. Lætitia Sadier sounds amazing, and she is a fantastic song writer in my opinon. I'm finding them to be a very deep band as well, loaded with social and political statements. This draws me to them even more.


Did anyone watch the video for "Tomorrow is Already Here"? It's the second link I posted. It's really a very very sad little video. The lyrics are very minimal, but loaded - which seems to be the case with a lot of stereolab songs. And the songs message is conveyed so effectively with the video. The songs structure and melody is almost whimsical to me and provides a strong juxtaposition against its message and the sad story told in the video. Very well done. Least that's my analysis.


Yeah man, I think what I'm going to do is start wth their first release and work my way up. I'm interested to hear their progression. This is from wickipedia, on the bands sound:

"Early Stereolab material displayed a heavy influence of krautrock sounds, particularly Neu! and Faust, characteristically relying on droning, repetitive guitar or keyboard riffs, with or without vocals. Early heavy use of distorted Farfisa combo-organ sounds were also reminiscent of early recordings by the Modern Lovers. As the band developed, they incorporated new instrumentation, and an increasingly complex sense of rhythm and structure, frequently making use of asymmetric time signatures as well as unorthodox chord progressions and melodic intervals, and increasingly displayed an MPB influence."
SoundCloud
Top

thats a point. they are like neu! light, and never reached the soul of can or even faust (which seems a few miles away in quality). so stereolab may be a nice door into a world of interesting music when you come from mainstream alternative/indie/whtasoever, but for me its nothing to stay at for too long. even the concerts lose their spirit after half an hour, no matter how beautiful the singing lady is.
-


"after all it wouldn´t have been possible without the impossible."
Top

Well, it all a matter of personal taste I suppose. I don't know much about Faust to be honest but I've known about and own albums by can for quite some time. I like them, but I've never been affected by them the way I've been affected by stereolab you know?

Maybe it's a matter of timing, some relationship between the feelings this music seems to evoke from my youth coinciding with the spring. For whatever reason its seeming to make a powerful impression on me. I don't really come from "mainstream alternative/indie/whtasoever" to be honest, I'm 36 and some of the bands I listened to when I was a teenager went on to become "mainstream alternative" - sheesh I remember the beginning of "alternative" (a label I never really cared for) but that's really irrelevant anyway. The bottom line for me really is how does it make me feel, you know what I mean?
Last edited by smutek on Sat Apr 28, 2007 4:21 pm, edited 1 time in total.
SoundCloud
Top

Me and my girlfriend just came back from our local market grocery shopping, listening to "You Little Shits". They are awesome.

Last year I went to Chicago for the first time just to see them. When Laetitia Sadier pulled out the trombone I just about lost my mind.

There was some incredible animation as well. Very haunting stuff. Probably the most impressive performance I have seen in the last ten years.

EDIT: Miss Modular is my girlfriends cellphone ring, and Dots and Loops is the shit.
Top

But that does not bother me, I like that album as I said...
Top

hey smutek, do you have ege bamashi and tago mago by can? Those are the really good ones, IMO, i'd be super surprised to hear anyone not digging them.


anyway, i love that stuff.


while we've been kinda sidetracked into german psyche-rock ---> the first two popul vuh records are also incredible. Don't care for the rest of their stuff at all though.