I'm leaving this here, but I already know that probably Ableton developer don't even bother reading this forum since there are some Live and Push features that the whole community has been asking for like 4 or 5 years (comping? pattern editor on the par with FL Studio's, pattern editor's "highlight scale", arranger mode for Push...), but anyhow.

We already have the scale note mode for Push. It's great, it allows people that are not so great at playing or at music theory to play staying in key. This is huge.

How about extending this mode to allow easy playing of chords? Yes, you can already play chords with easy forms, but playing anything beyond basic triads is a finger-twister.

Yes, you can insert the Chord and Scale Midi effect, but that is absolutely a workflow breaker. I want to try out some chords. I have to go the menu, scroll till the Chord effect, tweak with the paraments, go back to the browse mode, look for the Scale plugin, set it up and THEN play. That's like two minutes of fiddling around instead of playing. My ideas have already gone away. And what if I want  chord to be maj7, another to be sus2 and another to be second inversion? No luck here. 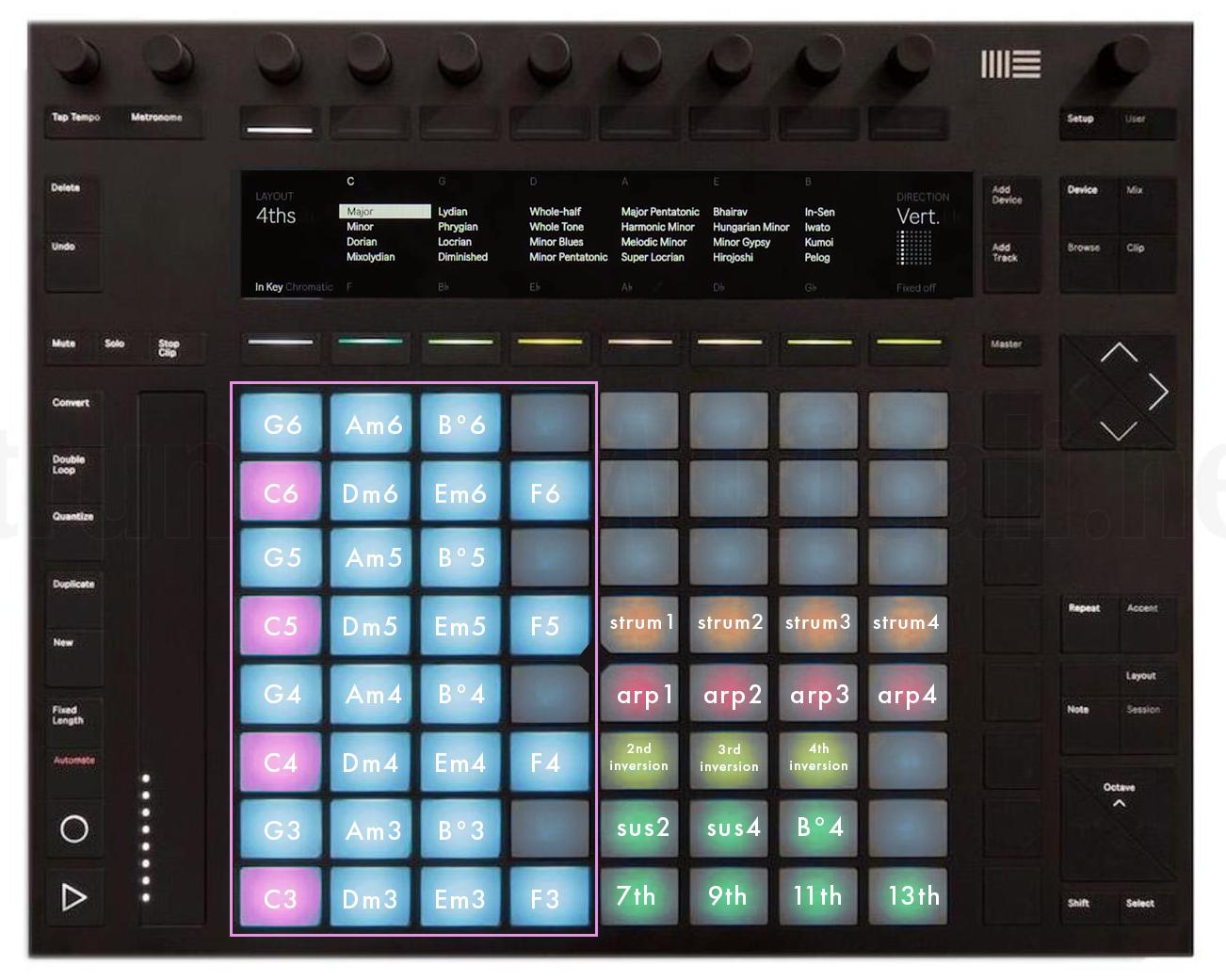 So, I'm in Note mode, with the turn of a know I enter Chord Mode. See the image for my rough idea. I "inherit" the scale from the Note mode (eg: C Major). On the right hand of Push each pad plays a chord of the C Major scale (C, Dm, Em...). We have the space to have four full octaves that the user can switch with the Octave Up - Octave Down buttons (from C1 to C4, from C2 to C5 and so on).

Pushing a chord would then play the corresponding triad. I can play extended chords by tapping the chord button AND the extended chord pad on right. Want to play the progression C Em7 G9 Dmsus2? As easy as tapping two pads at a time. With another set of pads you can select the inversion to play.

How cool would be that? How difficult to implement?

I agree that something like this would be awesome. I just found out that the launchpad pro mk3 has a super cool chord mode similar to this and I want it on push so bad!
Top

+1 for sure. would be awesome
Top

Scales are nice but we need a chord mode and something like this looks like a pretty good implementation.

Also i remember using the pxt live script with some way to "extract" chords. It would display a midi clip in chops with the ability to replay notes and chords just like slice mode does with transients. That feature was killer !
Top

do we have an update on this? I have the push2 myself and just got the komplete midi32. This one has that amazing chord feature but only applies to the Native instruments plugins. I agree It would be amazing if Ableton steps up!
Top

i wish my coding skills would be sufficient enough to be able to programm this and put it on github for everyone to use... i wouldnt even know how to begin doing this hahaha
Top

Including lots of chord-progressions presets and the ability to create own.
Top

Absolutely agree with others: this feature is a must have