by sugary weaver
so i just had this idea and since everybody seems to share their secret tricks these days, i thought i'd share and see if i could get some input. I've sent this message to a few people who would either know or be able to make it happen to see what they have to say about it:

To the best of your knowledge, would it be possible to use the camelot color key system on all the tracks in my set (i'd have to set em manually i assume)... and then use Max for Live (or something??) to come up with a device that would recolorize them according to how many notes i transpose? say: i inform Live the root value of clip(s) X to be in the key of B and have it (and all other clips/tracks in the key of B) turquise... then if i were to map a knob that could transpose clip X (or ideally all the clips simultaneously in a given track full of hits and one off samples) up one note to Db it would change the color of the clip(s) to pale blue (having all my Db tracks in my set getting the color pale blue manually) and so on. ...that way i can visualize harmonic relationships on the fly...(as well as hopefully learn to 'play' the camelot wheel and have harmonic movement in my tracks/remixes) just want to get an idea if things like this are possible yet. Probably not explaining this in the most efficient way, but hopefully you get what i'm talking about and think its a cool idea.

Ideally, I wish ableton would read the Key tag and automatically color my tracks according to the camelot system... and then i could transpose them, and they would adjust their color accordingly. that would open up so many doors. Thanks for any insight.

by MPGK
Hey Mike,
Never heard of this camelot system. Could you elaborate or post a link? 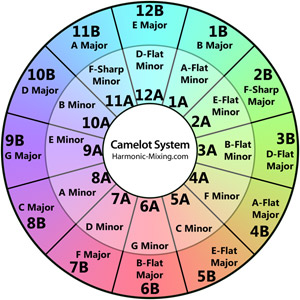 to sugary: don't know, i never adjust keys, i prefer letting tracks stay in original key and choose tracks accordingly. reason: i don't like how tracks sound when i change keys of them. and no need for max4live then

by MPGK
Ah okay, thanks. I'm no DJ, but I'd simply put the key in the track name and choose accordingly, without transposing more than one half step.

Frankly, I don't see the need for a $60 program to do this for me, and the system's nothing new. In fact, it's well over 300 years old, nothing more than a flipped circle of fifths with complementary colors. Nice business idea, though. Hats off to the gentlemen who "invented" this system, they're selling bread and butter as a gourmet menu.

by davepermen
well, try to go trough a collection of >1000 tracks manually to check the key of each. i'm glad i don't have to.

davepermen wrote:well, try to go trough a collection of >1000 tracks manually to check the key of each. i'm glad i don't have to.

Of course, I see your point. Out of curiosity, how does the program handle songs that don't stay in one key?

by davepermen
it can show more than one key, and then it's you and your ears.

davepermen wrote:it can show more than one key, and then it's you and your ears.

Okay, well it all comes down to your ears at some point, if you're doing it right.

of all the tracks i have, and of the ones i play out... not too many of them switch up keys. MIK also has bpm detection (which is pretty decent) and it's rarely if ever more than a half step off, meaning your mixing will more often than not translate harmonically. plus, i've some 77,000 songs... i would have to hire a team of 100 people to get it done in a month. MIK will do it in a little over a week probably (while i'm on vacation)

i like moving pitches around and what not. things may sound whack if you are trying to use them in a traditional sense, but for sampling purposes, it's great to see and manipulate lots of options on the fly. plus if you're just moving it up a half or so step, you can mix straight across and again, open up a ton of options you might other wise not have considered.
being able to have lots of harmonic movement on the fly can do wonders for your mixes.

if MIK could write the camelot color equivalent somewhere on the mp3 tag and ableton could read it...that would be an answer to my wish. then i'd like to be able to transpose on the fly and the colors change accordingly.

Like I said, I'm no DJ guy. This isn't exactly my cup of tea and I highly respect anyone who does a good job there. If this system serves you well, then it's all good. Like I said, "camelot system" is just a clever name for the same system that's been used since long before old JSB rocked his harpsichord. Maybe that's why they chose the medieval name?

Personally, I couldn't rely on a program to do the hearing work for me, and if you say it sometimes drifts a half step, then this would screw over your whole idea of a "harmonically elegant" set - while a transition by a perfect fourth is the "best" possible way to move between songs, an augmented fourth would destroy all the DJ-arrangement-smartness. (not that anyone but other musicians would notice)
And then I'd have to recheck every single track myself again to make really sure the program got it right, because if I really decide to use this system, I'd at least be consequent about it and make sure it works out the way I planned, making the program obsolete. Sure, it'd be some work to hear the keys and color-tag the songs, I'd say about 20 sec per song if we're talking about pop music in the broader sense and pay no mind to possible modulation. For a whopping 1000 tracks that would take... five and a half hour? Let's say 6-7 hours, an afternoon's work. Even if you say it takes two working days, I'd say that's a lot of dull work, but still acceptable.

Yeah, I know, ranting about a program you haven't even tried sucks. I'm not trying to do that here. Just expressing my doubts.
All times are UTC
Page 1 of 1
Powered by phpBB® Forum Software © phpBB Limited
https://www.phpbb.com/