My last post in the thread called "on music" ended with a "bye bye" as soon as I proved I was right, a week ago or smth. After that I never read it, because I am not very interested in "sound manipulation art" (as stringtapper calls "modern music"). My aim there was just to prove that: (1) music has a universal code which has nothing to do with sound; (2) 80-90% of the american users here think that music is sound, that is why they call music "sound" and viceversa, and talk about sound manipulation art as "music"; (3) most of them were not really interested in the music/audio debate, they were just trolling.

The topic here is about real music and its code (intervals and mathematic relations), not about sound. Besides, Peter Neubaecker is the inventor of Celemony DNA (detection of notes in poliphonic audio material). In other words, he is an expert of "sound" (the phisical phenomenon called by americans "music"). The fact he found a way to "extract" notes (music) from audio material (sound) is one of the main demonstrations that music (the code) and audio (soundwaves) are two different things. 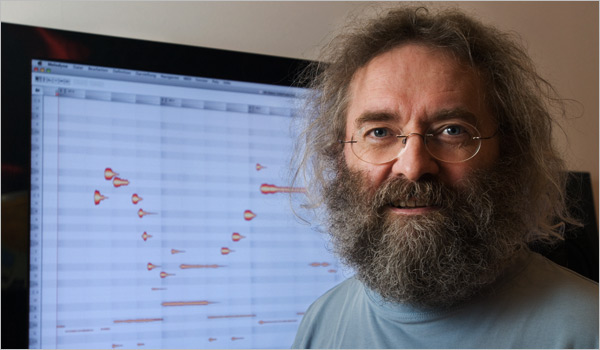 http://brandonlocher.bandcamp.com/track ... ide-part-i
some words
some sounds
some works in progress
Top

http://www.youtube.com/watch?v=OX3-d3e2kFw
some words
some sounds
some works in progress
Top

That "4'33" is conceptual music. One has to have a cultural background to understand the provocation. This topic is on the contrary about real music (prelinguistic and a-cultural)

That "4'33" is conceptual music. One has to have a cultural background to understand the provocation. This topic is on the contrary about real music (prelinguistic and a-cultural)

I guess for "musica mundana" he means "the code" (numeric relations), not silence in itself (which does not contain music). The code is prelinguistic and a-cultural. Regarding John Cage "4'33, on the contrary, only people with a philosophical background can understand it ("music" as the noises in the room, 4'33 = "absolute zero" etc.). A child would yawn, someone who does not know "4'33" aim would just wait for the (real) music.
Top

myrnova wrote: Finn & H20 please stop trolling. You have your "on (conceptual) music" topic which i don't read/enter anymore (as promised). Stay there and discuss about timbre and sound sculpture, rather than trolling here, or post something on topic, thanks. it all started when the Americans took over. no one is left in the lounge that speaks other languages besides English. this is because America has brainwashed with Hollywood and comic books and burger that are ace!

in my country 80-90% of the people hate something and 99% of them are right. 2 million people died. the Americans took over in 1945 and have been brainwashing ever since propaganda!
<RonaldReagan.jpeg>