Haha, this video is dam hilarious. Such simple ideas yet so genius
http://soundcloud.com/mimesisofficial
Top

Mimeticz wrote:Haha, this video is dam hilarious. Such simple ideas yet so genius

It also turns out to be a rather subversive satire as well:

"Over the past four decades, Gangnam has become an iconic place to Korean people, representing wealth, status, and luxurious life. PSY’s “Gangnam Style” is a satire about the Gangnam life itself which is nothing but materialistic and about people who are chasing rainbows, dreaming of becoming a Gangnam resident someday. If you had googled the phrase ????? (“Gangnam Style”) before the release of his song, you would have seen so many questions asking “What the heck is Gangnam style.” (Now you’ll get results almost all about the song.) As Gangnam earned the enviable reputation "overnight" (compared to Korea's 5000-year-old history) as the best place to live not because it offers rich heritage, sophistication, or cultural legacy, people don't really know exactly what they are longing for even in the midst of longing for the “Gangnam style.” And here, PSY is being sarcastic about the idea of "Gangnam style" that is not actually tangible, just like the “Emperor's New Clothes”."

"So, the song is a comic satire about people who bluff, pretending to be rich and trendy. "Oppan Gangnam style" can literally translate to "I'm a Gangnam style," in which "oppa" is a Korean referring expression used by females to refer to older males such as older male friends or older brothers. However, the narrator in the song refers to himself in the third person. He keeps saying he lives or loves a Gangnam style life, but in reality, he's far from it."

I really liked this video! I was even wondering why some of my Facebook merchant account friends were posting Oppa Gangnam as their statuses and now I understand them after watching this funny video. What is amazing is that if you analyze the video and its impact, you'll find that social media sites are really at its backbone. Without social media like Facebook, other people like me wouldn't find this video on YouTube. Even YouTube has its own part on the sudden popularity this video acquired.
Last edited by juniorsfave on Tue Sep 18, 2012 3:17 pm, edited 1 time in total.
Top

delicioso wrote:Cool. Do you happen to know what they use to produce?

logic and PT I believe. You know it's funny. He and I were talking about whatever synth/sequencer one uses does not matter at all just a week ago. LOL.

We demand an interview!

Or, you know, whatever.
Top

lol that is hilarious. good beat too!
Top 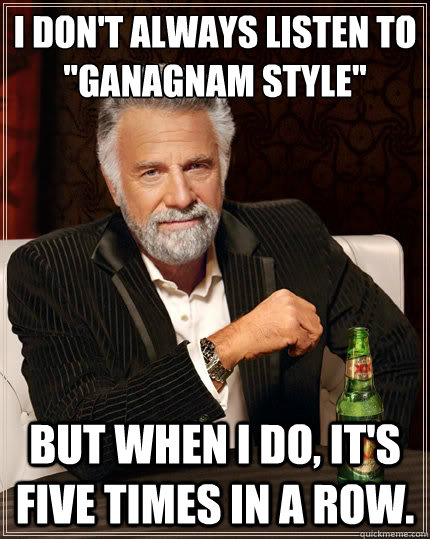 ShelLuser wrote:And most of all; despite his success it seems PSY doesn't turn into an arrogant SOB.

Yeah, he seems very self aware and extremely humble and appreciative of all the spotlight he's getting from suddenly blowing up. Here's a pretty good radio interview he did recently: http://www.youtube.com/watch?v=1GlnlyfZdA4
Top

And... this song has officially made it to #1 on the U.S. iTunes charts.

But, I feel music has become to much about the back up dancers, the set design and the light show.

Vivo wrote:But, I feel music has become to much about the back up dancers, the set design and the light show.

No, I mean what it LOOKS like, meaning just some musicians playing their instruments on a stage. Meaning, no back up dancers, no elaborate set design and light show.

If people think that just watching musicians play their instrument on stage is boring then they were really not that into their **MUSIC** were they?
Top

delicioso wrote:Cool. Do you happen to know what they use to produce?

logic and PT I believe. You know it's funny. He and I were talking about whatever synth/sequencer one uses does not matter at all just a week ago. LOL.

When you can write a song this catchy you could use just about use any synth/sequencer & get good results! That's talent.

Sure it does! Many people have said that it is boring to look at some guy hunched over looking at a computer screen on stage.

So, what their really saying is that the music really isn't that interesting.

It needs dancers, lights and an elaborate set design for it to be interesting.

I know, if you can't beat them, join them. Even Squarepusher has some sort of electronic helmet on now. Dehumanizing himself and severing any chance to connect with his audience.

If video killed the radio star maybe all these theatrics and performance art
concerts will kill music all together or maybe just the laptop "musician."